This page is dedicated to LARRY G. DAHL ( Medal of Honor) and all the other 359th guys who made the ultimate sacrifice

click on a name to the right for their rememberence page  at: ARMY.TOGETHERWESERVED.COM 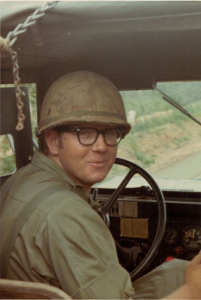 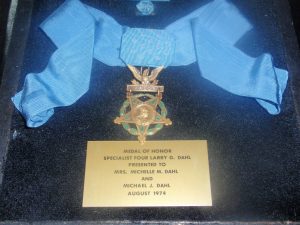 The President of the United States of America, authorized by Act of Congress, March 3, 1863 has awarded in the name of the Congress the Medal of Honor posthumously to:

for conspicuous gallantry and intrepidity in action at the risk of his life above and beyond the call of duty in
An Khe, Binh Dinh Province, Republic of Vietnam 23 February, 1971

Dahl distinguished himself by conspicuous gallantry and intrepidity while serving as a machine gunner on a gun truck near An Khe, Binh Dinh Province. The gun truck in which Spc4. Dahl was riding was sent with 2 other gun trucks to assist in the defense of a convoy that had been ambushed by an enemy force. The gun trucks entered the battle zone and engaged the attacking enemy troops with a heavy volume of machinegun fire, causing a large number of casualties.

After a brief period of intense fighting the attack subsided. As the gun trucks were preparing to return to their normal escort duties, an enemy hand grenade was thrown into the truck in which Spc4. Dahl was riding. Instantly realizing the great danger, Spc4. Dahl called a warning to his companions and threw himself directly onto the grenade.

Through his indomitable courage, complete disregard for his safety, and profound concern for his fellow soldiers, Spc4. Dahl saved the lives of the other members of the truck crew while sacrificing his own. Spc4. Dahl's conspicuous gallantry, extraordinary heroism, and intrepidity at the cost of his life, above and beyond the call of duty, are in keeping with the highest traditions of the military service and reflect great credit on himself, his unit and the U.S. Army.